Syria truce: Russia accuses US of failing to abide by deal

Russia has accused the United States of failing to fulfil its obligations under the truce agreement in Syria.

Syria - A defence ministry statement said Washington was using a "verbal curtain" to hide its reluctance to rein in the rebel groups it supports.

The truce has broadly held since taking effect on Monday although the Russian-backed Syrian army and rebels have accused each other of many violations.

Meanwhile, the UN has warned there is a "problem" with getting aid into Syria.

Special envoy Staffan de Mistura placed responsibility on the Syrian government which, he said, had not yet provided the "facilitation letters" that would allow aid convoys to pass through army checkpoints and reach besieged areas.

"We cannot let days of this reduction of violence be wasted by not moving forward," he told reporters in Geneva.

The Russian defence ministry insisted that, from the very beginning of the truce, Moscow had been fulfilling its obligations, which includes ensuring that the Syrian air force does not bomb areas held by mainstream rebel forces and setting up checkpoints in divided second city of Alepp.

It therefore said it found "confusing" recent comments by US officials that expressed doubts about whether Russia would be able to deliver.

"Only the Syrian army has been observing the ceasefire regime... while the US-led moderate opposition has been increasing the number of shellings of residential quarters," the ministry statement said.

"Moreover, it appears that the verbal curtain of Washington is aimed at hiding the non-fulfilment of the US obligations."

The US has not reacted to the comments from Moscow, but the state department did acknowledge some incidents "on the part of both the opposition and the Assad regime" were continuing.

The US, Moscow also added, had not yet compelled rebels to separate themselves on the ground from allied fighters from Jabhat Fateh al-Sham, a jihadist group known as al-Nusra Front until it formally broke off ties with al-Qaeda in July.

The move is necessary before the US and Russia can start conducting joint air strikes targeting Jabhat Fateh al-Sham and so-called Islamic State (IS).

The Russian defence ministry also stressed that the Syrian army was ready to pull troops back from the Castello Road in Aleppo to ensure the safe movement of humanitarian convoys.

Mr de Mistura said the creation of a demilitarised zone along the road, which runs around the north of the city into the rebel-held east, was proving complicated. 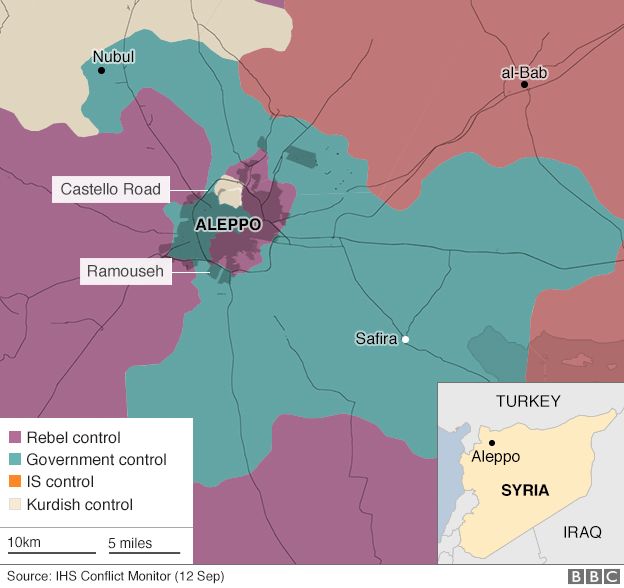 Both government and rebel forces are ready to withdraw personnel and weapons at least 500m (1,640ft) away from the road, but they will not begin until they see each other doing the same, according to a monitoring group.

"There is great fear because the regime exploits every opportunity," Zakaria Malahifji of the Aleppo-based rebel group Fastaqim told Reuters news agency. 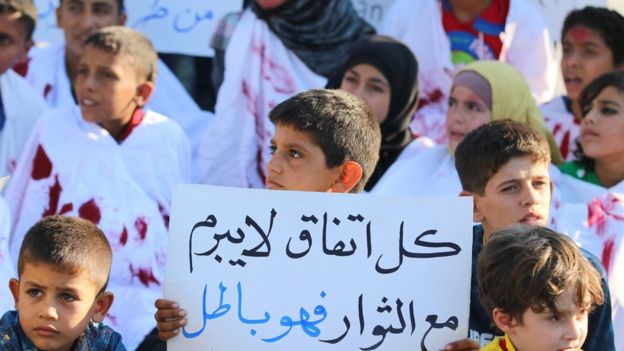 Later, Mr Egeland said a convoy of 20 lorries carrying food supplies for the estimated 250,000 people trapped in eastern Aleppo had crossed into the buffer zone between the Turkish-Syrian border and would hopefully arrive on Friday.

The big fear is that if no aid gets through soon, the warring parties will grow impatient, and the fighting will begin, reports the BBCs Imogen Foulkes in Geneva.