Syria - Syrian troops have launched a large-scale ground attack on rebel-held areas of Aleppo in a bid to make concrete military gains after nearly a week of punitive bombardment that has mostly hit civilians.

They advanced on the old city of Aleppo, a former refugee camp in the north captured at the weekend then lost to rebel forces, and in two other districts, opposition forces and state television said.

Rebel commanders were defiant about their chances of repelling troops on the ground, pointing to years of resistance against a better-armed enemy and the advantages of battle-hardened opposition fighters in close street-to-street combat. 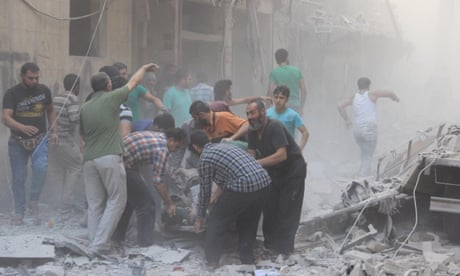 Hell itself: Aleppo reels from alleged use of bunker-buster bombs

“The Syrian regime and its allies have threatened and vowed to seize rebel-held Aleppo dozens of times for the last few years now,” said one Aleppo commander for the opposition Free Syrian Army.

“Regime forces will lose their advantage inside the besieged city of Aleppo, as Russian air power loses its effectiveness in close urban battles.”

The city is a fiercely contested prize. It was Syria’s cultural and economic hub before civil war broke out, and is the last major urban centre where rebels have a presence.

There are estimated to be about 250,000 people still living in the besieged area of eastern Aleppo, but the barrage of explosives, including alleged bunker-buster bombs, have brought what daily life still existed in the battered districts to a near halt.

More than 200 people have been killed and many more injured in one of the most intense aerial attacks of the five-year civil war. Russia was directly accused of war crimes at the UN security council for its use of munitions against civilian targets.

Assad appears determined to try to break the stalemate that has gripped Aleppo since 2012 – when rebel forces seized most of the areas they hold now – at almost any cost.

Among the dead on Tuesday was a young girl, whose body was lifted down from the ruins of her home by a search and rescue team using a crane. Waiting below was her father, crazed with grief, held back by local people risking bombs to aid the rescue or support the bereaved.

A single bomb had trapped four families under the rubble of the same apartment block in the neighbourhood of al-Shar, where locals said the old buildings are easily brought down by ordinary munitions.

Another photo showed a single hand protruding from the ruins , which locals said belonged to another lost child. “Hasan is carrying five floors on his back. He is 10 years old,” said the activist Abdulkafi Alhamdo.

Nearly half of the casualties in eastern Aleppo since a ceasefire crumbled last week have been minors, Save the Children said on Monday. Some of the youngest victims have been born and died in a city divided and at war.

Many have died in hospitals where exhausted and overwhelmed doctors are running low on medical supplies and struggling to treat the victims flooding into their wards.

Only about 30 medics are left to provide care in the besieged area of the city, according to Dr Zaher Sahloul, a Syrian-American who has volunteered in Aleppo several times and now provides online advice on complex operations.

The World Health Organisation and the International Committee of the Red Cross called on Tuesday for safe corridors into the city to allow ill and wounded people to be evacuated for treatment.

The toll from the attacks has been exacerbated because they hit civilian infrastructure left in besieged areas, including hospitals, the White Helmet search and rescue group’s facilities, markets and homes.

“I feel lost after my house was targeted by warplanes two days ago,” said Abdulrazak Zaksouk, a media activist living in al-Ansari district.

“Also many important things are starting to run out in the markets, like gas, fuel, many kinds of food. There is also a shortage of electricity. We depend on a large generators, but sadly because of the shortage of fuel we just use them for three hours a day.”

The commander of an Iraqi Shia militia fighting in support of Assad told Reuters a large force spearheaded by the army’s elite Nimr or Tiger forces had started to move in armoured vehicles and tanks for an attack on rebel-held areas.

Rebel forces and the government traded claims about fighting for Farafra neighbourhood in the old city.

Syrian state TV said government troops had claimed several blocks, but a commander fighting in the area told the Guardian they had pushed back the advance and killed seven troops. There was no way to independently verify the situation.

The Associated Press quoted a military official as saying the fighting would continue until opposition fighters were wiped out, but rebels insisted that their spirit had not been broken.

They pointed to their success this week in pushing government forces back from the deserted Handarat refugee camp, strategically important because it overlooks a road into the city, and seizing a military academy last month.

“The rebels prepared themselves for the siege well, even though of course our troops and munitions are being drained,” the opposition commander said.

“The Russian bombers are relying on a scorched earth policy. We think they lack accuracy in targeting, because they couldn’t hit our troops near the frontline where they are deployed. They are taking revenge on civilians.”