Yemen - BBC - A Saudi-led coalition air strike has hit a funeral hall in the Yemeni capital Sanaa, killing 82 people according to officials.

More than 500 people were injured, the rebel Houthi-run government said.

Coalition sources have denied carrying out the air strike.

Houthi rebels are at war with the internationally-recognised Yemeni government, which is backed by a Saudi-led military alliance.

The International Committee of the Red Cross said it had prepared 300 body bags.

Hundreds of body parts were found inside and outside the hall after the strike.

One rescuer, Murad Tawfiq, described the scene as a "lake of blood", the Associated Press news agency reports.

The funeral was being held for the father of Houthi-appointed Interior Minister Galal al-Rawishan, an ally of the rebels and former President Ali Abdullah Saleh.

A number of Houthi rebel military and security officials are believed to have been killed in the strike.

BBC correspondents say their presence could explain why the funeral was targeted, though its likely many civilians were also there.

The government of President Abdrabbuh Mansour Hadi is fighting both the Houthis and forces loyal to Mr Saleh. 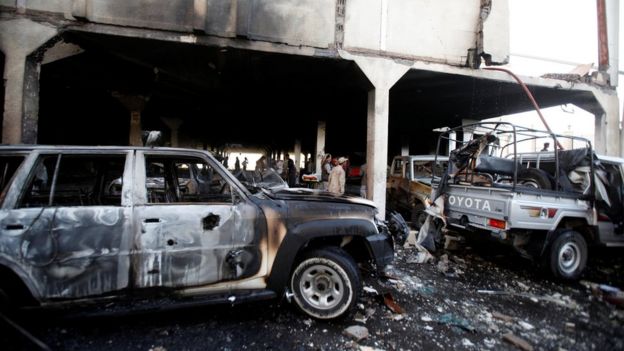 Thousand of civilians have been killed since the Saudi-led air campaign started last March, the UNs rights body says.

Nearly three million people have been displaced in Yemen, one of the regions poorest countries, since the war began in 2014.

The Houthis took the capital then, forcing Mr Hadis government to flee. Some ministers have since returned to the city of Aden.