At least 39 people, including at least 15 foreigners, have been killed in an attack on a nightclub in Istanbul, Turkeys interior minister says.

A gunman opened fire in Reina nightclub at about 01:30 local time (22:30 GMT), as revellers marked the new year.

Suleyman Soylu said efforts were continuing to find the attacker, who was believed to have acted alone.

At least 69 people were being treated in hospital, the minister added. Four were said to be in a serious condition.

Turkish President Recep Tayyip Erdogan said the attackers were trying to "create chaos" and pledged to "fight to the end" against terrorism.

Addressing reporters early on Sunday, Mr Soylu said: "This was a massacre, a truly inhuman savagery.

"A manhunt for the terrorist is under way. Police have launched operations. We hope the attacker will be captured soon."

Only 21 of the victims had been identified, he said. Fifteen or 16 were foreigners, he said, and at least three of the Turkish victims may have been employees at the club.

Several hours later, Israel confirmed one of its citizens, 19-year-old Leanne Nasser, was among the dead.

Media captionTurkey attack survivor: "There were bodies on the floor"

Media captionEyewitness Ismail Celebi was nearby when the attack happened 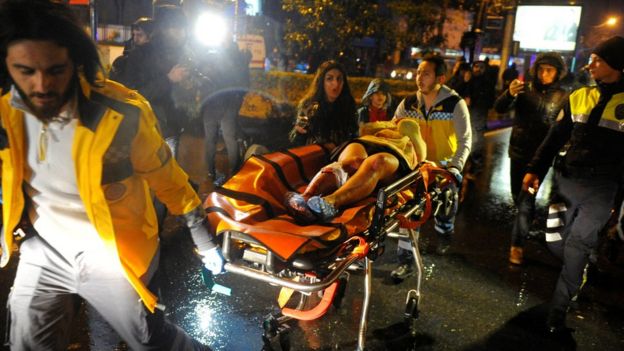 Early media reports suggested the attacker may have been wearing a Santa Claus outfit, but newly-obtained CCTV footage shows the suspected attacker in a black coat outside the club.

Mr Soylu said the gunman was wearing a coat and trousers, but "we were informed that he was wearing different clothes inside".

Reina nightclub, in the the Ortakoy area of Istanbul, is an upmarket venue on the banks of the Bosphorus.

Istanbul Governor Vasip Sahin said the attacker killed a policeman and a civilian outside the club before entering and opening fire.

"Before I could understand what was happening, my husband fell on top me, the Associated Press news agency quoted Sinem Uyanik, who was inside the club, as saying.

"I had to lift several bodies from (on) top of me before I could get out. It was frightening.

There were reportedly as many as 700 people in the nightclub at the time of the attack, some of whom jumped into the water to escape.

e Turkish authorities have imposed a media blackout on coverage of the attack, citing security and public order concerns, but it does not extend to official statements.

Some media reports spoke of more than one attacker and Dogan news agency reported that some witnesses claimed the attackers were "speaking Arabic", but there is no confirmation of this.