Jerusalem - Four Israeli soldiers, three of them cadets, were killed in Jerusalem on Sunday when a Palestinian attacker driving a truck ploughed into them deliberately, injuring more than a dozen more.

The attack, the deadliest in months, comes after a lull in recent violence between Palestinians and Israelis.

It comes at a time of warnings about growing tensions, not least over Donald Trump’s highly controversial plan to move the US embassy to Jerusalem, and calls from some rightwing Israeli ministers to annex parts of the occupied Palestinian territories.

Police said the dead, three women and a man, were all in their twenties, . Among the wounded three were described as in a serious condition.

The attack took place as a large group of Israeli soldiers visited a scenic outlook overlooking modern Jerusalem and the Old City, a few blocks from the current US consulate.

The Israeli prime minister, Benjamin Netanyahu, said: “We in Jerusalem have just experienced an unprovoked terrorist attack, a murderous attack that claimed the lives of four young Israelis and wounded others. This is part of the same pattern inspired by Islamic State, by Isis, that we saw first in France, then in Germany and now in Jerusalem.”

No one has claimed responsibility for the attack, and Palestinians with no known links to Isis have carried out ramming attacks in the past. Palestinian media identified the attacker as Fadi al-Qanbar, a married man in his 20s, who had reportedly previously served time in an Israeli prison.

Israeli police said the driver was from Jabel Mukaber, an area of Israeli-occupied east Jerusalem not far from the scene of the attack. Some media reports suggested Israeli licence plates on the vehicle meant it had been stolen. 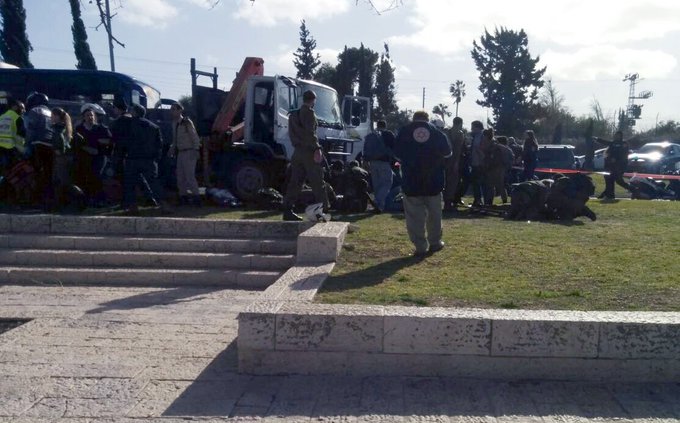 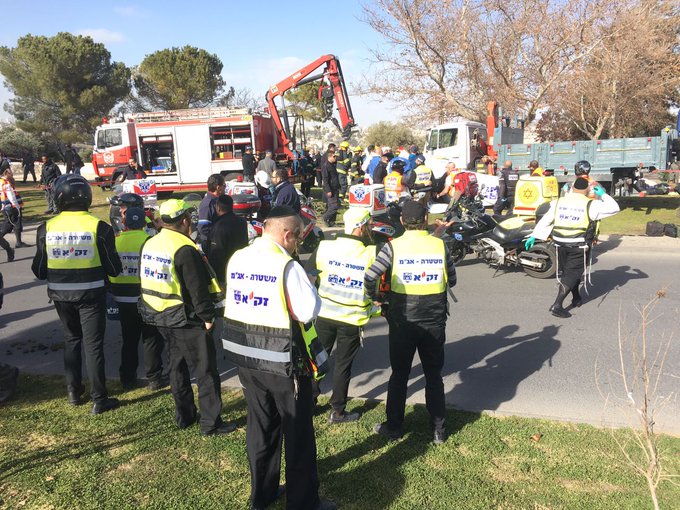 The driver was shot dead by other soldiers and a tour guide with the group that was hit as the driver reversed back towards the dead and injured.

Graphic security camera footage shot from a distance showed the truck racing towards a group of soldiers standing by their bus and then driving through the group, scattering bodies. After a gap of a few seconds the truck is seen reversing into them again.

“In a fraction of a second during which I was speaking with one of the officers, I saw the truck plowing into us,” the guide, Eitan Rod, told Israel Army Radio.

“After a few rolls on the grass I saw the truck start to reverse and then I already understood that this was not an accident. I felt that my pistol was still on me, so I ran up to him and started emptying my clip. He went in reverse and again drove over the injured.”

As emergency workers removed the bodies from the scene, dozens of other young soldiers, some visibly shaken, were gathered on a park terrace where officers, paramedics and a military rabbi comforted them.

Leah Schreiber, a tour guide accompanying another group of soldiers, witnessed the attack.

“I was with a group of about 10 soldiers training to be commanders when I heard shouting,” she said. “I was explaining about the view of Jerusalem.

“I heard shouting and then shooting. I looked behind and saw the truck had driven on to the sidewalk hitting the soldiers.

“It took a few seconds to understand what was happening. Some soldiers had been told to hide in case of a second attack, while others were shooting the chauffeur.”

A security guard identified only as A told Channel 10: “In a split second I looked to my left and saw what I can only describe as a speeding truck which sent me flying.”

“It was a miracle that my pistol stayed on me. I shot at a tyre, but realised there was no point as he had many wheels, so I ran in front of the cabin and at an angle I shot at him and emptied my magazine. When I finished shooting, some of the officer cadets also took aim and also started firing.”

Landy Sharona, a paramedic who attended to the injured, told the Jerusalem Post: “About 10 people were lying on the ground near the street. Some of them were trapped under the truck.”

Other eyewitnesses who arrived quickly on the scene described coming across one body under the truck’s wheels and two others beside it while the driver was slumped dead behind a windscreen hit by a dozen bullets.

Israel’s chief of police, Roni Alsheich, described the incident as a terror attack. “You don’t need more than two to three seconds to find a terrorist target. The soldiers at the scene reacted immediately and killed the attacker,” he said.

The incident is the deadliest Palestinian attack in Jerusalem in months. It happened just after the cadets had disembarked from a coach that had brought them to the Armon Hanatziv promenade, a grass-lined stone walkway with a panoramic view of the walled Old City.

Alsheich told reporters he could not rule out the driver of the truck having been motivated by a similar attackon a Berlin Christmas market that killed 12 people last month.

“It is certainly possible to be influenced by watching TV, but it is difficult to get into the head of every individual to determine what prompted him, but there is no doubt that these things do have an effect,” he said.

Rescue workers said about 15 wounded people lay on the street as ambulances raced to the scene. The Israeli military regularly takes soldiers on educational tours of Jerusalem, including the Armon Hanatziv vantage point.

The US secretary of state, John Kerry, has warned of serious consequences if Trump follows through on his place to move the US embassy from from Tel Avi to Jerusalem.

“You’d have an explosion, an absolute explosion in the region, not just in the West Bank and perhaps even in Israel itself, but throughout the region,” he said in a recent interview with CBS.

A wave of Palestinian street attacks, including vehicle rammings, has largely slowed but not stopped completely since October 2015. Assaults over the past 15 months have killed at least 37 Israelis and two visiting US citizens.

At least 231 Palestinians have been killed in violence in Israel, the occupied West Bank and the Gaza Strip during the same period. Israel says at least 157 of them were assailants in lone attacks often targeting security forces and using rudimentary weapons including kitchen knives. Others died during clashes and protests.

Israel says one of the main causes of the violence has been incitement by the Palestinian leadership, with young men encouraged to attack Israeli soldiers and civilians.

The Guardian
Recommend to friends