A TERRORIST turned Westminster Bridge into a bloodbath by mowing down at least 20 people — with one witness calling it “a scene of absolute horror”.

Screaming tourists ran for their lives as the Hyundai Tucson mounted the pavement and started ploughing through crowds. 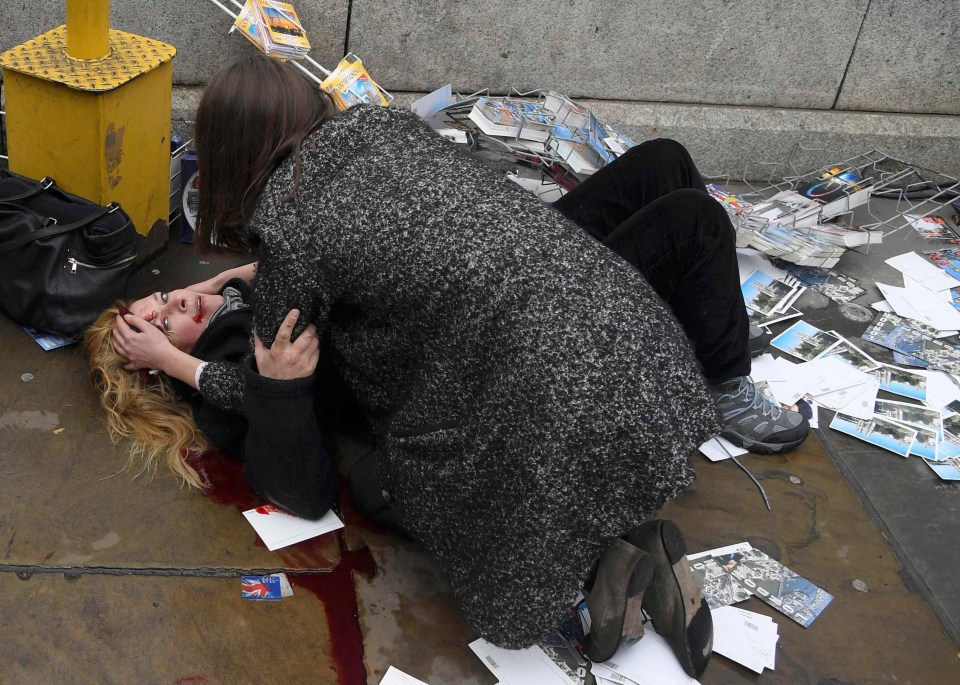 A woman was knocked under a bus and several victims were carried hundreds of yards along the road.

Another woman plunged into the Thames, and a man fell 20ft on to a footpath below the bridge.

Other people lay amid Union Jack postcards sent flying into the air when the SUV smashed into a souvenir stall. 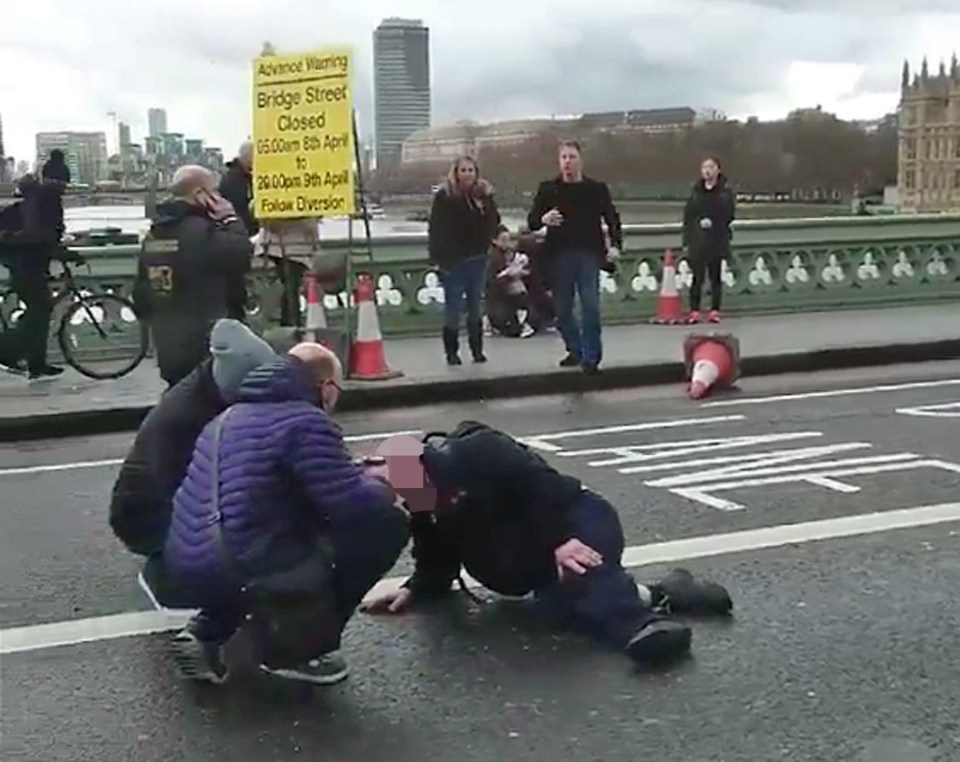 The Hyundai Tucson mounted the pavement, leaving a trail of devastation in its wake

Horrific footage shows a bloody trail of carnage moments after a terrorist drove his two-tonne car into pedestrians on Westminster Bridge.

Four people died, including the attacker, and 29 were injured in the murderous rampage outside the Houses of Parliament.

The video shows victims lying injured on the world famous bridge and passers-by battling to save them. 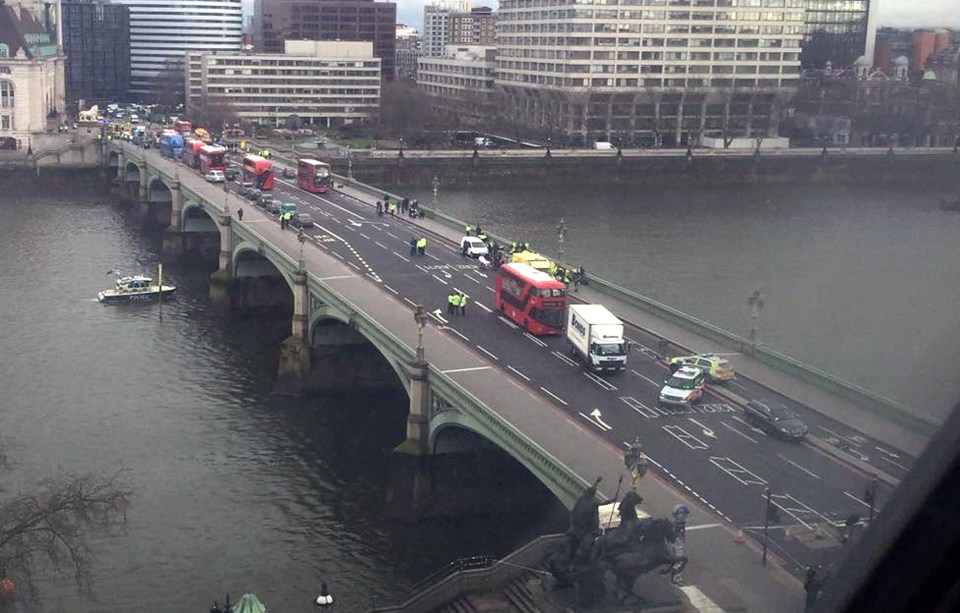 Four people died, including the attacker, were killed in the carnage with 29 more injured

One woman ended up under a bus and at least one more leapt off the bridge to try to escape the crazed maniac.

A few feet away a woman was seen lying on the ground with blood pouring from her head.

Footage was taken by a woman who can be heard repeatedly saying “Oh my god”, before asking: “What coward is doing this? 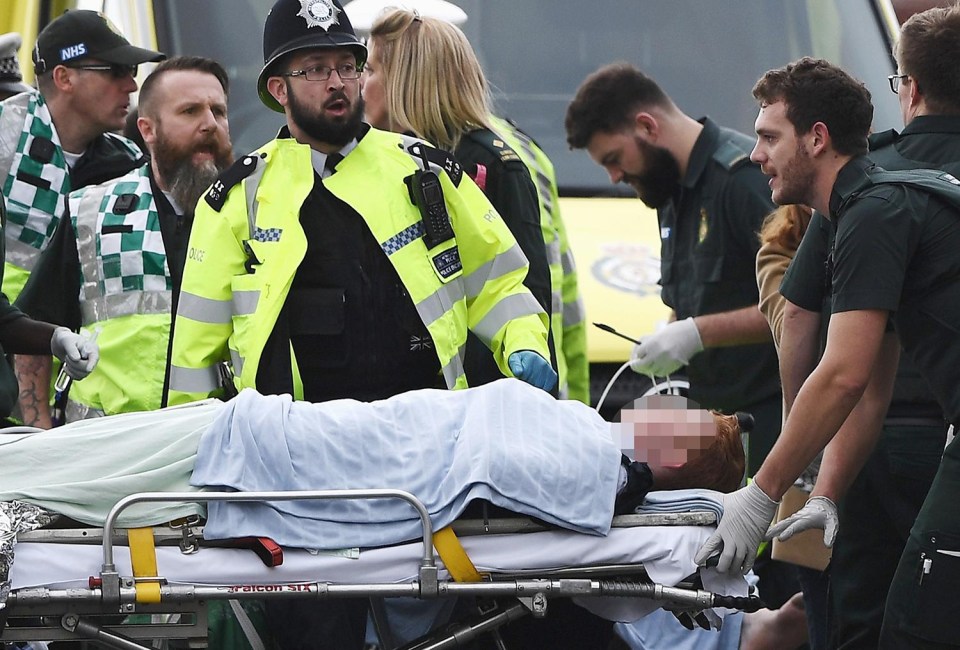 Paramedics were called to the blood-soaked scene 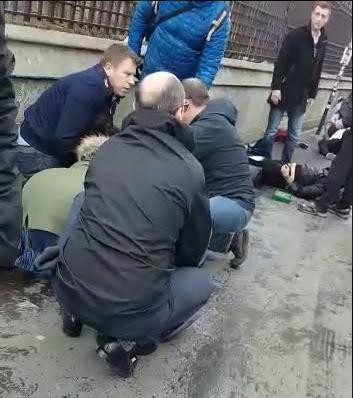 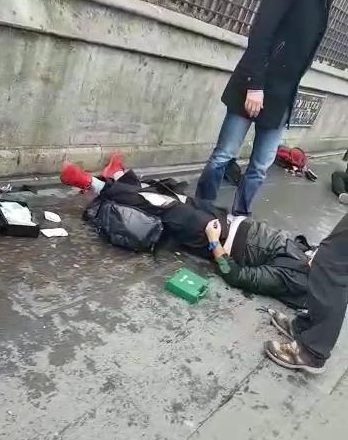 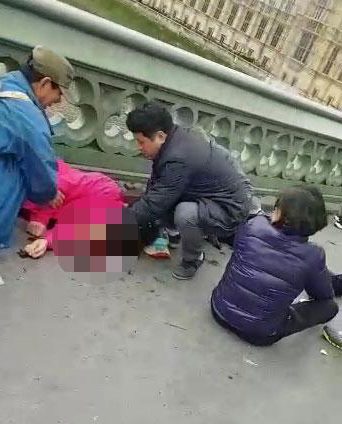 Footage was taken by a woman who can be heard repeatedly saying Oh my god, before asking: What coward is doing this

The Hyundai 4×4 mounted the pavement and ploughed into around a dozen pedestrians before smashing into the Parliament gates.

The attacker stabbed a police officer to death before being shot dead. 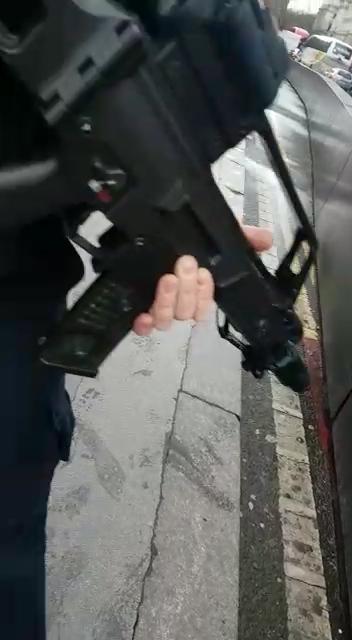 It comes as footage emerged showing a woman plunging into the River Thames as the terrorist mowed down pedestrians on Westminster Bridge.

She was pulled from the river alive following the devastating attack. 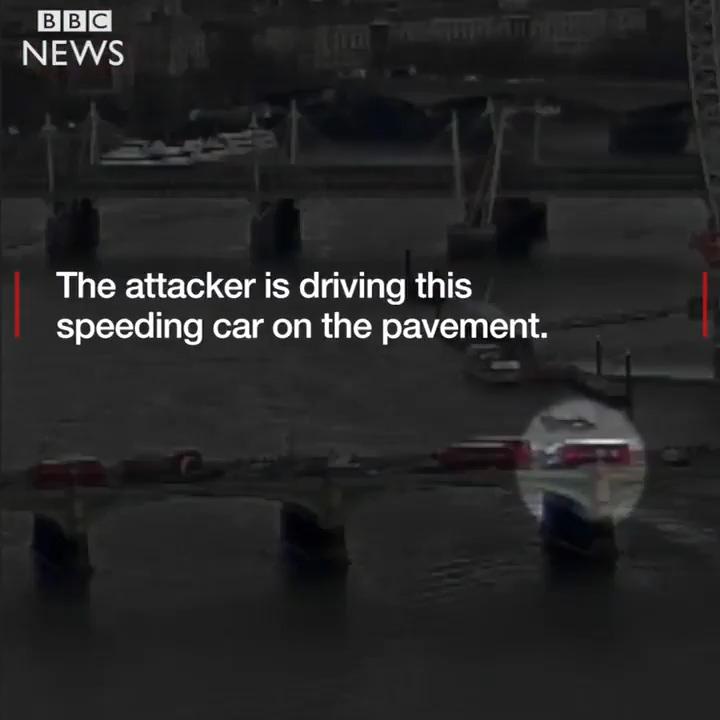 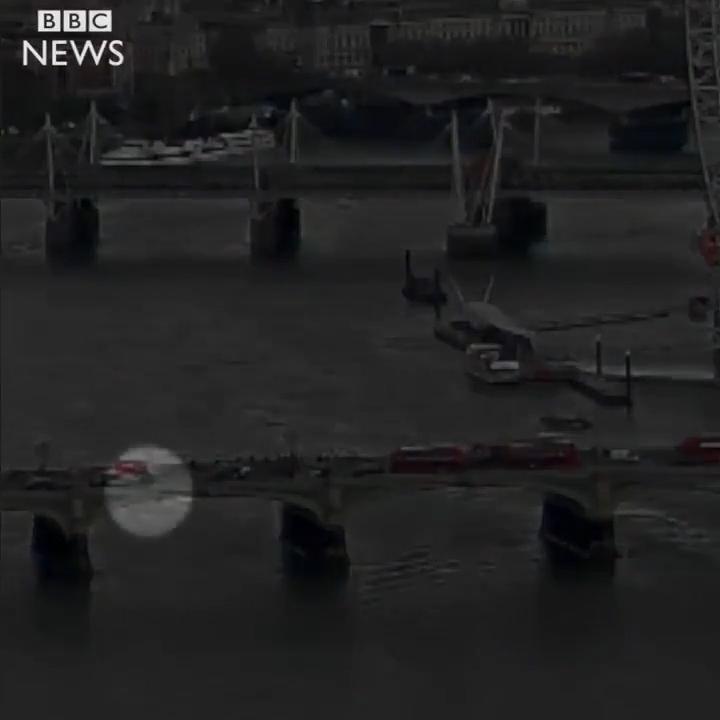 The out of control driver ploughs into pedestrians 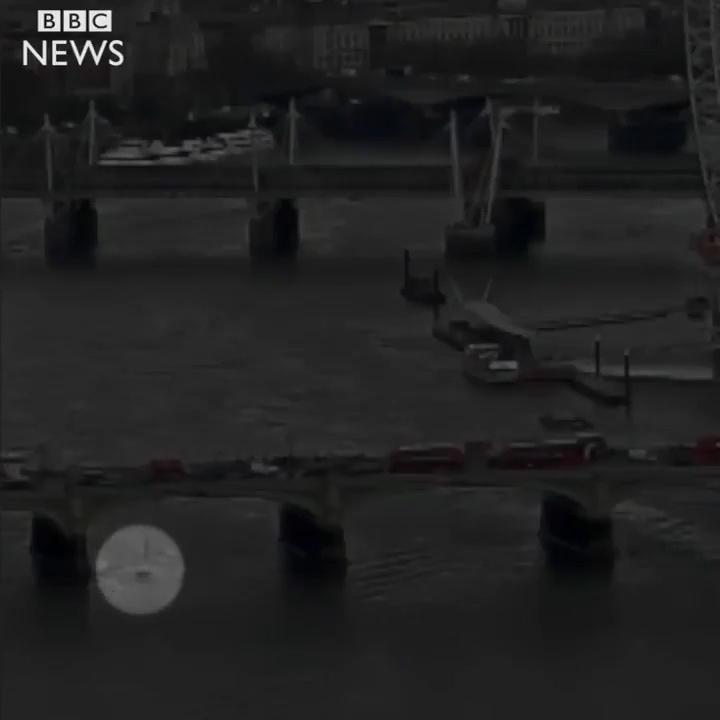 Chilling footage shows the Hyundai speeding along the world famous bridge and a person falling into the Thames.

It is not known if she fell or jumped.

She was left in a critical condition following the terrifying bridge plunge.

MOST READ IN NEWS 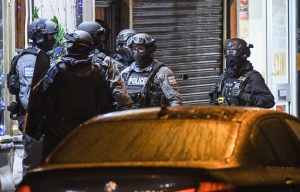 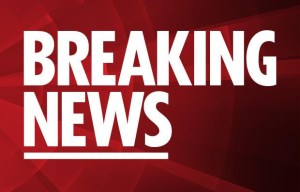 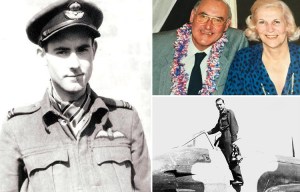 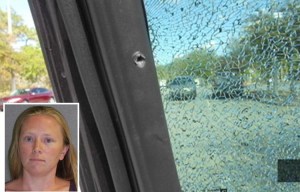 Mum arrested after leaving son, 3, in the car with loaded gun, which he grabbed and shot out the window

A spokesman for the Port of London Authority siad; ““A female member of the public was recovered from the water near Westminster Bridge. She is alive but undergoing urgent medical treatment on a nearby pier. We believe she fell from the bridge.” 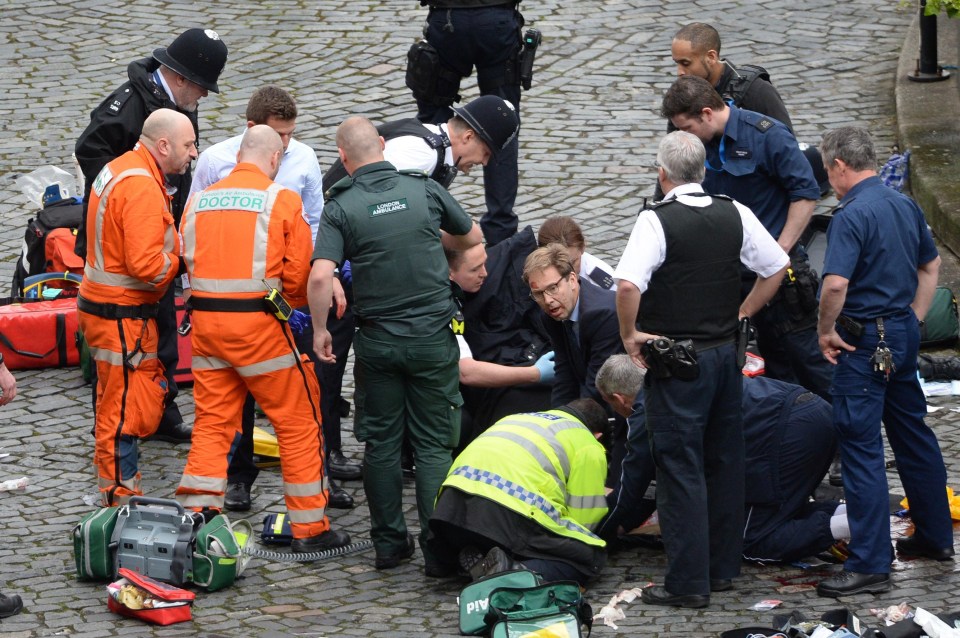 Tobias Ellwood was seen attending to a victim 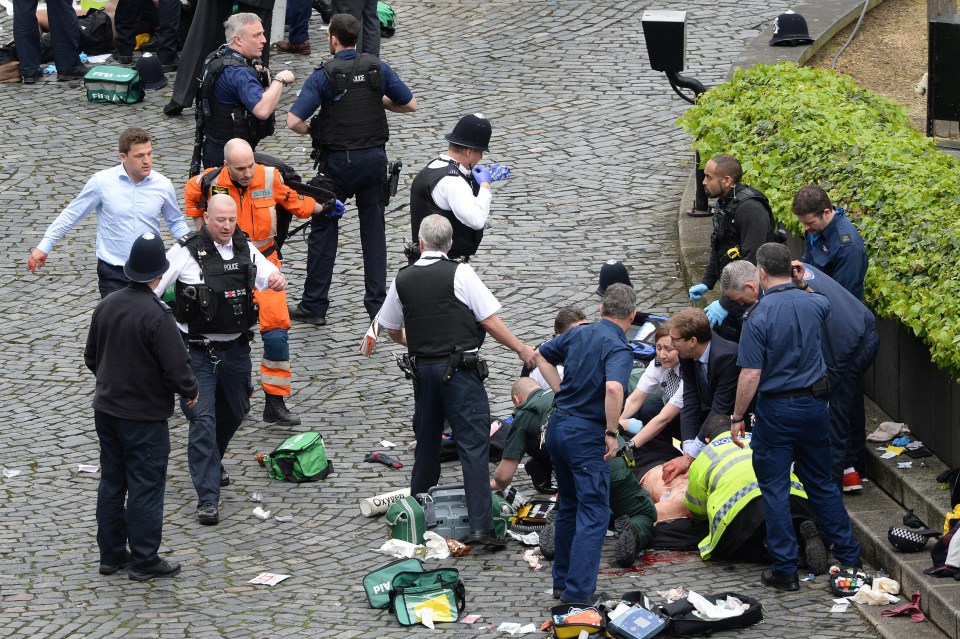 The Tory MP gave CPR to the policeman who later died

The unarmed cop stabbed to death has been named as 48-year-old dad Keith Palmer.

Foreign Office Minister Tobias Ellwood gave CPR and mouth to mouth to the hero cop wounded in the attack.

The minister, who was formerly a British Army officer, bravely raced to help the dying officer after he had been attacked by a knife-wielding fanatic in the grounds of the Palace of Westminster.

Tragically the officer died just hours after the blood-soaked rampage which began when a car smashed into pedestrians on Westminster Bridge.

The Tory MP was seen with blood on his mouth and clothes as he tried to stem the blood flow by applying pressure to the wounds.

Speaking just hours after the attack which has so far left four dead, including the attacker, Mr Ellwood, formerly a Captain in the Royal Green Jackets, said it was a “huge tragedy”.

He said: “I am a witness, I was the last one on the scene before he died so I am not allowed to say anything.

“It is now murder, I was on the scene and as soon as I realised what was going on I headed towards it. 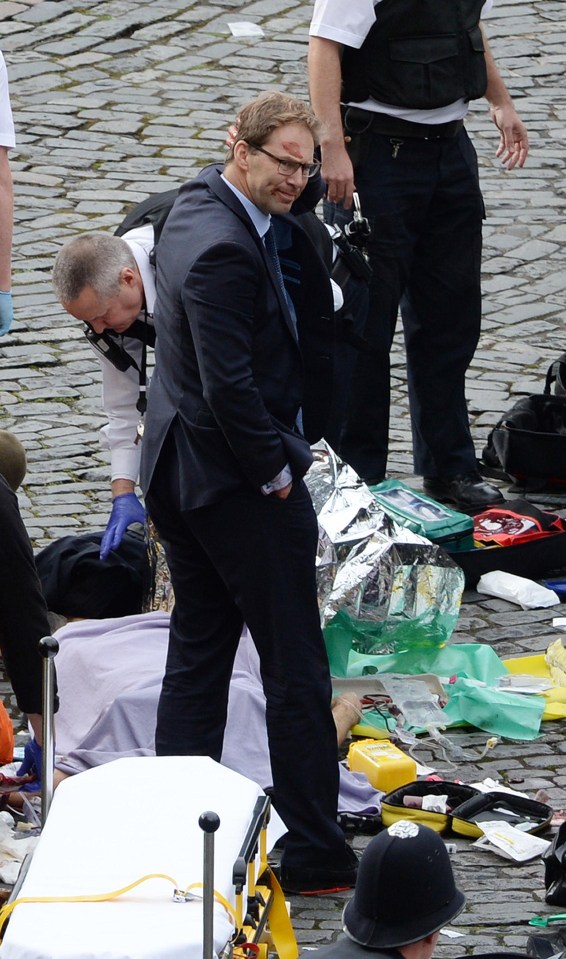 The minister lost his brother in the Bali bombings in 2002

“It is a huge tragedy, it really is.

“I tried to stem the flow of blood and give mouth to mouth while waiting for the medics to arrive but I think he had lost too much blood.

“He had multiple wounds, under the arm and in the back.

“As I understand it the attacker has also died.

The former soldier lost his brother Jonathan, a teacher, in the Bali terrorist bombings in 2002.

@Tobias_Ellwood is an absolute hero for what he did to help the policeman this afternoon!

At least four people are dead and 20 others have been treated for injuries after a 4×4 mowed down victims on Westminster Bridge before the driver attacked a policeman outside one of Parliament’s gates.

Mr Ellwood waited for the air ambulance to arrive after helping paramedics and police on the scene.

He spoke with officers before returning to the Foreign Office this afternoon.

The MP for Bournemouth East has been Parliamentary Under-Secretary at the Foreign Office since 2014 - looking after the Middle East and Africa briefs.

Mr Ellwood said at the time that he believed that his brothers death could have been avoided if MI5 had given sufficient warnings to citizens.

His brother was killed in the second of two blasts that tore through a nightclub. He had to wait three days to find out that he had been killed.

"There was intelligence that said attacks on tourists at nightclubs was expected and indeed there was a (grenade) attack on 23 September.

"With all that in mind the threat levels should have been raised higher," said Mr Ellwood.