Syria war: IS driven back in Tabqa, US-backed fighters say

Syria - US-backed Syrian fighters say they have made more gains in their battle with Islamic State (IS) militants for the strategic city of Tabqa.

They are supported by elite US forces and air strikes by a US-led coalition.

Tabqa has been a key IS command centre and is just 50km (30 miles) from Raqqa, the groups Syrian stronghold.

The SDF said in a statement that IS now controlled only the northern part of the city, next to the Tabqa dam.

BBC World Service Middle East editor Alan Johnston says that if the SDF can capture Tabqa, it will be further evidence that IS is coming under greater pressure deep in what has been its Syrian heartland. 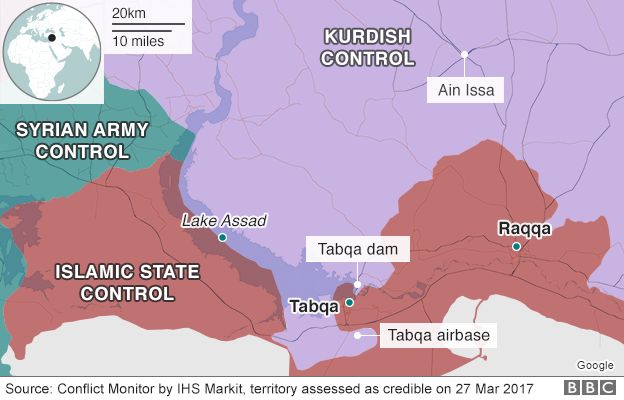 IS captured the Tabqa dam in 2014, giving it control of a vital reservoir and a hydroelectric power station that supplies large parts of Syria.

UK-based monitoring group the Syrian Observatory for Human Rights said the SDF now had almost complete control over Tabqa but militants were using suicide attackers and car bombs to slow the advance.

Many residents fleeing the fighting have been evacuated across nearby Lake Assad by SDF fighters using a makeshift ferry.

Ismail Mohamed, who fled with his family, said the situation in the city was dire.

"The humanitarian situation was really bad. People are hungry and tired," he said, quoted by AFP news agency.

"Everyone is psychologically shattered, crushed. When we got on the water, riding in the boat, we truly couldnt believe it, we were so happy."

Last month, the SDF paused its offensive to allow engineers to inspect the dam, amid fears that it had been damaged in the fighting.

The UN had warned that if the dam were to collapse, it could lead to flooding on a massive scale with "catastrophic humanitarian consequences".

Many civilians living downstream in Raqqa had begun fleeing their homes, activists said, but IS sent cars around the city with loudspeakers ordering people not to evacuate.