Syria - US jets have attacked a convoy of Iranian-backed militiamen in south-eastern Syria in the first clash between the American military and forces loyal to Tehran since the US military returned to the region almost three years ago.

The airstrikes occurred near the Syrian town of al-Tanf, where Syrian opposition forces backed by the US have been under recent attack by Syrian and Russian jets near the main road linking Damascus to Baghdad. The militias, made up mainly of Iraqi Shia fighters, had been advancing towards the base throughout the week.

The US military said the strikes were aimed at stopping the militia advance and protect fighters it has sponsored throughout the civil war and in the fight against the Islamic State terror group. 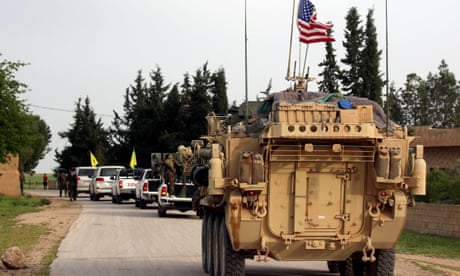 The clash underscores the complexity of the fast-changing battlefields of Syriaand Iraq, where a splintered opposition is struggling to hold ground, Isis faces military defeat, and forces allied to the Syrian leader, Bashar al-Assad, are in the ascendant.

Opposition units in the area continue to be backed by the CIA. They were raised to fight Isis, but have also been positioned as a bulwark against Iran-backed forces that have crossed from Iraq and been instrumental in recent gains made across Syria by the Assad regime.

“A convoy going down the road didn’t respond to numerous ways for it to be warned off from getting too close to coalition forces in al-Tanf,” said a US defence official in Washington. “Then there was finally a strike against a lead portion of that movement.”

Defense secretary said that the attack did not mean that the US would be getting more involved Syria’s civil war.

“We are not increasing our role in the Syrian civil war, but we will defend our troops,” Mattis said. “We will defend ourselves (if) people take aggressive steps against us. And that’s been a going-in policy of ours for a long time.”

An opposition leader in al-Tanf said several thousand militiamen were trying to clear anti-Assad forces from the highway, in order to push west towards Mayedin and Deir Azzour, two crucial legs of a land route that Iran is trying to clear towards Damascus.

The Guardian reported earlier this week that senior Iraqi and Iranian officials had recently moved the course of the corridor about 140 miles south of its original route because of a strengthened US presence along its original course, through Syria’s Kurdish north-east.

Earlier on Thursday, Iran’s Fars news agency, which is linked to the country’s powerful Revolutionary Guards Corps, claimed 3,000 members of Hezbollah had been moved to al-Tanf to combat a US plot.

Though they remain central to the US-led campaign to defeat Isis in eastern Syria and western Iraq, the forces sponsored by Washington are becoming central to US fears that Iran is finalising a corridor that would secure influence from Tehran to southern Lebanon.

US commanders are planning to move forces north from the Jordanian border and south from the Kurdish north towards Deir Azzour, one of the last bastions of Isis in Syria. The planned push, however, is being viewed by Iran as a threat.

“It didn’t start off about Iran, and it still isn’t totally about them,” said a senior European military official. “But it is becoming that way.

On the eve of a visit to Riyadh, where he has vowed to reset relations with Saudi Arabia, Donald Trump has taken a hardline stance against Iran, and the Assad regime, which Tehran heavily backs.

Riyadh has been pushing for a reset of bilateral relations, which winds back a US pivot towards Iran under the Obama administration in favour of renewed ties between Washington and Riyadh that had been deeply strained during the former president’s second term.