Syria - The continuing suffering of civilians living under siege in Syria has been brought into sharp focus by new images of a malnourished baby who later died of starvation in a suburb of Damascus controlled by the opposition.

The images, released on Monday by the news agency AFP, show Sahar Dofdaa, a one-month-old baby weighing less than 2kg, with sunken eyes and her ribs protruding through translucent skin. The child was being treated for malnutrition by a doctor in the town of Hamouria, in the eastern Ghouta region. She died on Sunday.

“The supplies are very low, and if it continues more kids will die,” said one aid official, who requested anonymity.

Tens of thousands of civilians in Ghouta are living under a blockade imposed by forces loyal to the Syrian president, Bashar al-Assad. About 3.5 million people in Syria live in besieged or hard-to-reach areas, and the majority of those are in places militarily encircled by the Assad regime.

Infighting by local rebel forces and the hoarding of food supplies by merchants have worsened an already dire crisis.

Doctors and activists say food shortages are so severe that dozens of cases of malnutrition are being seen in local clinics and field hospitals. New mothers are unable to breastfeed their children because they themselves are undernourished, and products such as baby milk are almost non-existent. 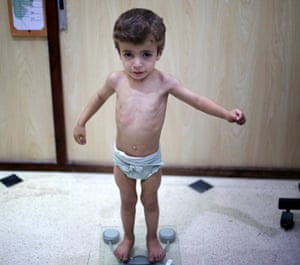 A Syrian toddler is weighed in a medical examination in eastern Ghouta, where civilians are living under a government-imposed blockade. Photograph: Anadolu Agency/Getty Images

Mohamad Katoub, a doctor and official at the Syrian American Medical Society, which helps to run several hospitals in Ghouta, said there were currently 68 cases of severe malnutrition in hospitals in the region. The actual number was probably higher owing to difficulties in gathering data from all medical facilities in the war-torn area. He said deaths among these patients were usually a result of malnutrition weakening their immune systems, which then failed to ward off infections.

Yahya Abu Yahya, a doctor in the region, told AFP that out of 9,700 children examined in recent months, 80 were suffering from the most severe form of malnutrition, 200 had moderate acute malnutrition and 4,000 had nutritional deficiencies.

Sahar, the baby in the photographs, was unable to breastfeed because her mother did not have enough food to produce milk, AFP said.

“Today eastern Ghouta is suffering from the worst kind of criminality,” said the activist Raed Srewel. “Thousands of children are in danger, and if there is no international movement or a UN initiative to resolve this, the consequences will be extremely dangerous and Ghouta will become a humanitarian catastrophe.”

Eastern Ghouta is one of several “de-escalation” zones created under a deal brokered by Russia and Turkey to reduce the violence in Syria. But the government has continued to impose a siege on the area, giving rise to mounting concerns over the suffering of civilians.

Aid officials say families have been forced to sell food supplements to buy more essential staples like sugar or bread, leading to cases of acute malnutrition. A kilogram of sugar now costs the equivalent of $15 (£11), one official said – a price far beyond the reach of civilians who have been living for years under brutal conditions.

The government has limited the aid provided to those areas by international organisations and the UN, and recent bouts of infighting between rebels have made it more difficult to send aid. The shortage has given rise to a local black market controlled by unscrupulous merchants, which has worsened civilian suffering and made basic staples prohibitively expensive. Most families subsist on bread made of barley, olives and boiled plants. 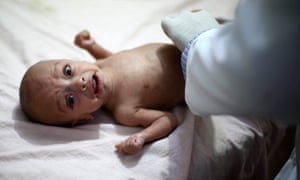 A baby is examined on a stretcher in Ghouta. Aid organisations are able to supply only limited help to the region. Photograph: Anadolu Agency/Getty Images

The siege of eastern Ghouta had long been porous, with smugglers evading or bribing the local fighters manning checkpoints. But an offensive this year that broke the rebels in many towns in rural Damascus allowed the government to tighten the blockade significantly.

Violence continues in other parts of Syria, with Islamic State militants reportedly killing more than 80 people in the past two days over accusations that they collaborated with the Syrian government to undermine the terror group.

The Syrian Observatory for Human Rights, a war monitoring organisation, said 83 people were killed by Isis in the town of Qaryatain in Homs province. The town fell to Isis in 2015 when militants conquered the nearby historic city of Palmyra; Isis reportedly destroyed a monastery and imprisoned many of Qaryatain’s Christian inhabitants. The town was later reclaimed by the government with the backing of Russian forces, but Isis recently launched a counter-offensive.

The group is in retreat across Syria after losing its de facto capital, Raqqa, last week in a campaign by Kurdish forces backed by a US-led international coalition.