A British man has returned home after an ordeal that began with charges of drinking alcohol and touching another mans hip in Dubai.

Jamie Harron, 27, was sentenced to three months in jail on Sunday, having been arrested in July, but an intervention from the UAEs ruler saw him released.

The electrician had been accused of putting his hand on a mans hip to avoid spilling a drink in a crowded bar.

After arriving at Glasgow Airport late on Tuesday, he said he felt "very good" and that he was "very happy to be home".

Mr Harron, from Stirling, was asked what he would do first when he got home.

He replied: "Get in a good bed, its been a total shambles.

"Its just total shock I feel. 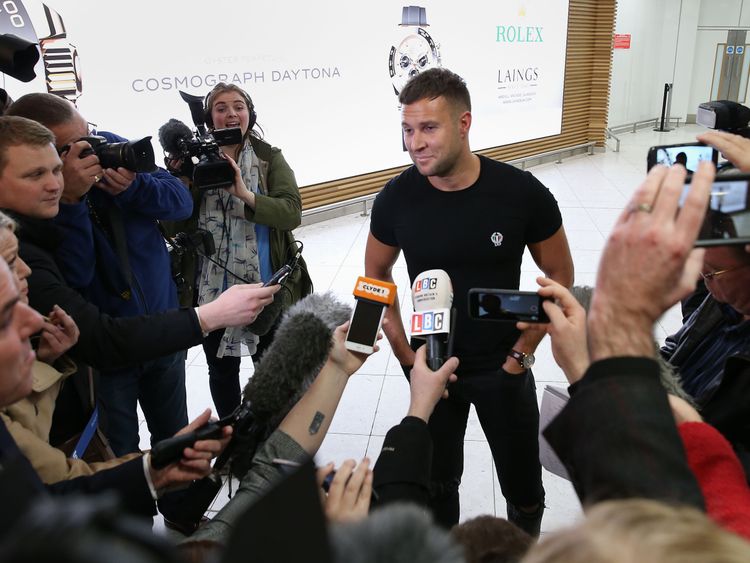 Image:Mr Harron was met by family and journalists when he returned to Scotland

"I get to sleep in my own bed because Ive been sleeping on my mates couch for three and half months.

"I cant believe its been four months in total."

He would not rule out returning to the United Arab Emirates, despite his experience, saying: "Im not going back in a hurry, but I would go back later on.

"I think Ive been caught up in a bad situation.

"I didnt see light at the end of the tunnel to be honest." Image:Jamie Harron had been in Dubai on a two-day stopover

Mr Harron, who had been working in Afghanistan, had been on a two-day visit to the popular tourist destination when the incident took place at Dubais Rock Bottom Bar in the summer.

Following his arrest, he lost his job and was told he could spend years in prison.

Mr Harron was also sentenced, in his absence, to 30 days in prison for failing to appear in court, for allegedly making a rude gesture and for drinking alcohol during the same incident.

He was jailed for five days before being released on bail with his passport taken away.

But he was freed after the emirates ruler Sheikh Mohammed bin Rashid Al Maktoum made a special order for cases against him to be dismissed.

The intervention was described by Radha Stirling, chief executive of campaign group Detained in Dubai, as "a courageous and honourable decision".

She had added: "While it highlights the urgent need for judicial reform in the country, it is also a hopeful sign that the United Arab Emirates leadership possesses the will and vision to pursue such reforms in the future."

Police had called Mr Harron on Monday telling him that the charges against him had been dropped and he could collect his passport.