Forces loyal to the Syrian regime have recaptured most of the city of Palmyra two months after it fell to Islamic State militants for the second time in a year.

Led by Iranian-backed militias and Russian special forces, the loyalist units entered the city on Thursday, nearly three months after Isis took it over.

The fight to retake Palmyra, a world heritage site, had been long and intense, with the retreating Isis fighters laying an extensive network of mines and booby traps throughout the famed Roman ruins that were once one of Syria’s pre-eminent tourist attractions.

The Russian president, Vladimir Putin, congratulated loyalist forces on the seizure. Moscow’s elite military units had been on the ground when Palmyra was recaptured from Isis for the first time last March and were again present over the past month.

The ancient site was extensively damaged during the terror group’s first occupation and that damage is thought to have increased since December. Isis used the Roman amphitheatre and library to stage public executions, wreaking widespread destruction throughout one of the region’s most esteemed archeological sites. The extremists hold most pre-Islamic civilisations in contempt.

When Isis stormed back into Palmyra in December, using the same desert tracks it had used to flee the city nine months before, it was taking advantage of the campaign by the Syrian president, Bashar al-Assad, to retake opposition-held eastern Aleppo. It stole some priceless treasures and destroyed others, overrunning Syrian government troops in less than a day.

Its latest retreat comes amid steady losses of territory elsewhere in Syria and in Iraq, where a campaign to defeat the terror group has stepped up in recent weeks. Turkish-backed Arab units fighting under the Free Syrian Army banner retook the town of al-Bab, north-east of Aleppo, last month, driving Isis forces west towards Raqqa, their last redoubt in Syria.

Across the border, Iraqi troops have established a foothold in Mosul’s south-west, confining some of the organisation’s most diehard fighters to a corner of one of their two remaining centres of gravity – the other being Raqqa.

The campaign to retake the rest of Mosul is thought likely to roll on well into the spring and then turn towards Raqqa, where much of the Isis leadership is believed to be in hiding.

A loose alliance of Turkish, Russian and US forces are yet to determine the force that will attack Raqqa, with Turkey remaining adamant that Syrian Kurdish proxies currently being employed by the US to isolate the city should not be used to storm it. 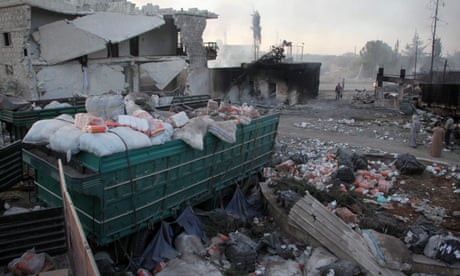 Donald Trump’s CIA director, Mike Pompeo, gave Turkey no assurances on a recent trip to Ankara. Turkey says it will continue to defy attempts by Syrian Kurds to establish a foothold west of the Euphrates river, which would bring them into a pocket of its border in which Kurds have no historical presence. Turkey fears that once there, the Kurds would link up with Kurdish areas further west, changing the demography of its entire border with Syria.

Kurdish units in the border town of Manbij said on Thursday that Russia had brokered a deal to allow Syrian government forces into villages to the west of Manbij, a move that restored the presence of the central government near the border for the first time in five years.

Turkey denied such a deal had been struck and said it would advance against the Kurds in Manbij if they did not withdraw to the east. The claims underscore the complexity of the battlefield in northern Syria which, after the recapture of rebel-held Aleppo, has shifted into a multi-pronged fight against Isis, while localised conflicts have also played out.

In recent weeks, loyalist forces have attacked Turkish-backed rebels fighting Isis near al-Bab. US-backed Kurds have squared off against rebels backed by both Ankara and Washington.