Irans President Hassan Rouhani has won a second term in office, the interior minister has announced.

Mr Rouhani, a moderate who agreed a deal with world powers to limit Irans nuclear programme, will thus avoid a second-round run-off.

His main challenger has complained about alleged voting irregularities.

Ebrahim Raisi, a conservative cleric, accused supporters of Mr Rouhani of hundreds of acts of propaganda at voting booths - banned under electoral law.

Voting time had been extended by five hours on Friday, until midnight, amid an unexpectedly high turnout of about 70%.

Election officials said the extensions to voting hours were due to "requests" and the "enthusiastic participation of people". 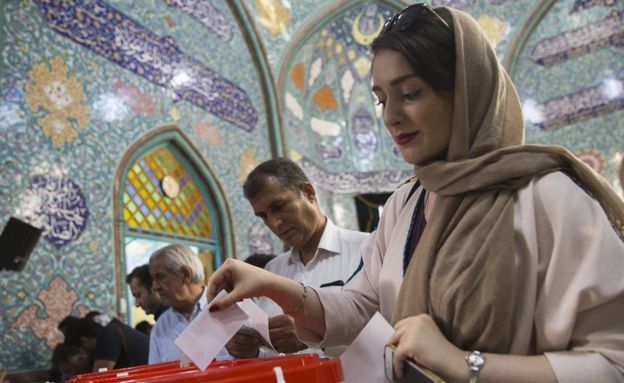 Irans hardliners had pulled all the stops and mobilised all their resources to bring out as many people as possible to grab the last centre of power in Iran that was not under their control, namely the executive branch.

Sensing an effort by the hardliners, supporters of President Rouhani who back his promises to steer the country toward moderation came out in big numbers too. Turnout has been unprecedented. In Tehran, five million people turned out to vote - twice as many as in 2013.

This was a revenge of the people against the hardliners who intimidated them, jailed them, executed them, drove them to exile, pushed them out of their jobs, and discriminated against women.

President Rouhani will now have a bigger mandate to push through his reforms, to put an end to extremism, to build bridges with the outside world, to put the economy back on track.

Iranians have said a resounding Yes to President Rouhani who, in recent years and particularly during the last several weeks of campaigning, promised to expand individual and political freedoms and make all those centres of power, like the Revolutionary Guard, accountable.

Mr Rouhani, 68, promised a moderate vision and an outward-looking Iran, and tied his success to the success of the nuclear deal brokered between Iran, the US and other countries in 2015.

US President Donald Trump opposes the deal, which eased sanctions on the Middle Eastern country, but his White House renewed it earlier this week.